One of the most criminal aspects of the COVID regime was the decision to pressure low-risk teens into getting a shot that was known to cause cardiac inflammation. Myocarditis used to be a rare disorder discussed mainly in academic literature, but now it is everywhere. What have we done to a generation of young hearts, and what is being done to detect, diagnose, and treat the problem? Unless we can find an angle that ties in to Ukraine, our politicians, media, and medical establishment don’t care.

We are over a year into the known safety signals of this vaccine for myocarditis, and yet the shots still have not been pulled, even for younger males. In fact, it’s still a requirement in many colleges. Yet reports of myocarditis and pericarditis are so prevalent now that just in the first eight weeks of 2022, we’re already at 47% of the total VAERS submissions for 2021. There were 24,177 reports of pericarditis/myocarditis submitted to VAERS in 2021. In 2022, just through Feb. 25, there were 11,289 reports, which is nearly half of last year’s total. Here is the graphic presentation from Open VAERS: 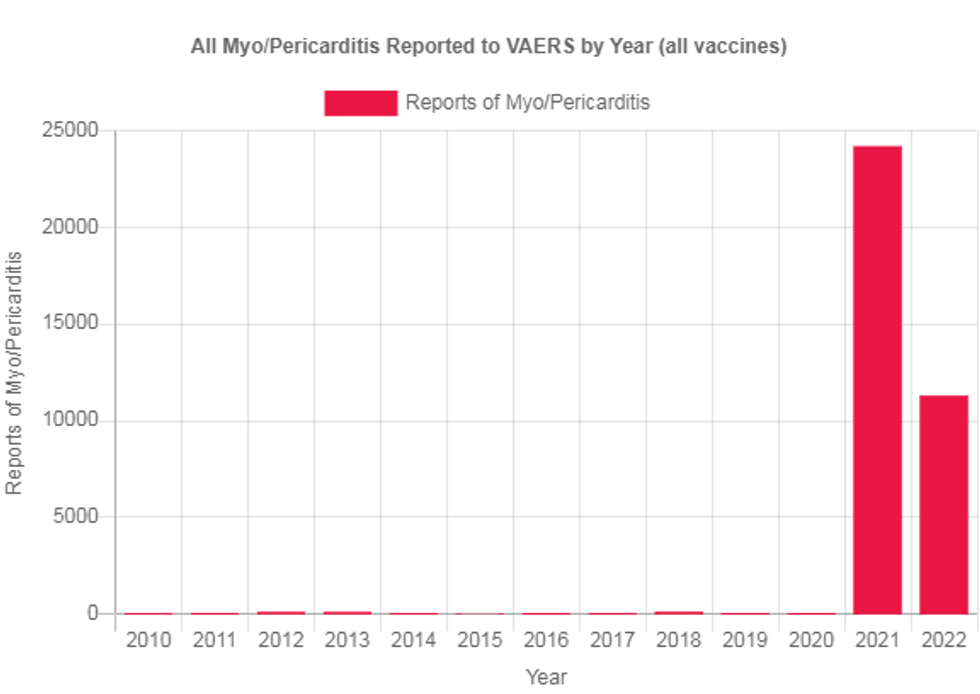 The reporting to VAERS is very disturbing because the trend line of vaccination, especially for the younger people more prone to this heart inflammation, has halted to a trickle in recent weeks. So why are there so many more reports this year? There are likely two possible explanations. Either more people and doctors know about VAERS and know to look for myocarditis, or there is a time bomb with many more people now realizing they have heart problems months later. Either way, this means that the initial estimates of case prevalence were just the tip of the iceberg, and we are likely to see young hearts damaged for years to come.

What is so shocking is that several weeks ago, the CDC recognized the problem and attempted to get ahead of it by suggesting that “an 8-week interval may be optimal for some people ages 12 years and older, especially for males ages 12 to 39 years.” But historically, if we recognized even a fraction of heart problems from a shot, it would have been pulled from the market entirely! Yet here they are still recommending it, despite the fact that the virus poses low risk for this age group, notwithstanding the fact that the shot doesn’t stop transmission and that it is now outdated for the current strain of the virus!

If the reporting of myocarditis and pericarditis continues at this rate, we’ll see over 73,000 cases this year. And even if more people have become aware of VAERS, it is still woefully underreported.

It’s not acceptable (and never was) for the media and the pharma-paid “fact checkers” to automatically dismiss VAERS. It is our main pharmaco-surveillance tool and was put in place precisely to serve as the consolation to the public for Congress absolving vaccine manufactures of liability. Also, the data complements what we’ve learned universally from all the myocarditis vaccine studies – that it targets teens and early 20s more than other age groups and is more potent after the second dose. Here is the age breakdown of the VAERS reporting: 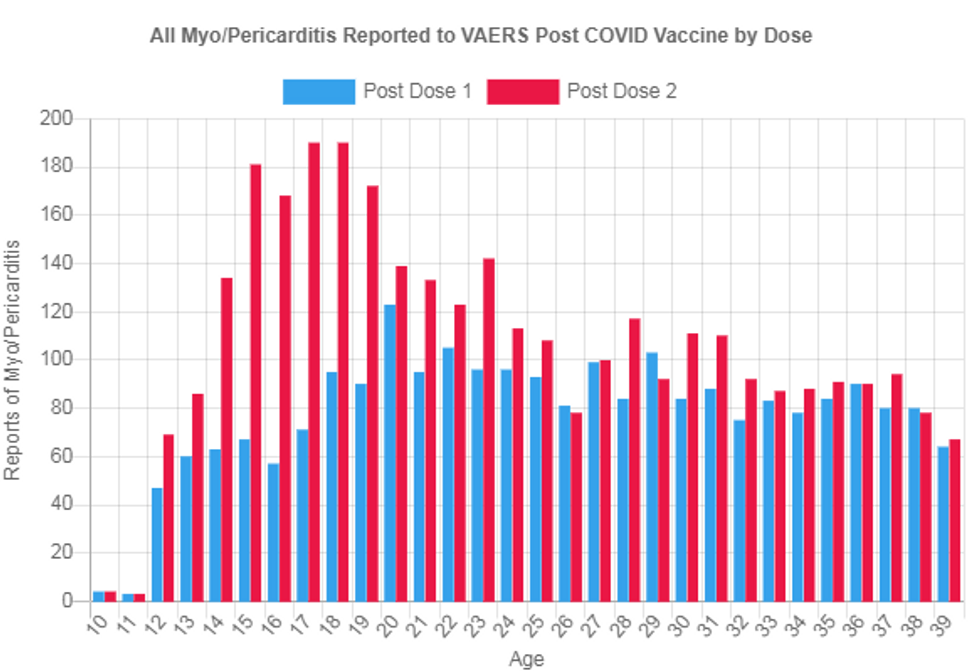 The CDC’s own researchers published a study in JAMA in which they clinically confirmed most of the myocarditis submissions to VAERS. As such, they concluded, “Given the high verification rate of reports of myocarditis to VAERS after mRNA-based COVID-19 vaccination, underreporting is more likely. Therefore, the actual rates of myocarditis per million doses of vaccine are likely higher than estimated.”

Moreover, now we have documents released via FOIA showing that Pfizer admits VAERS is a robust and legitimate safety signal reporting tool. In a document from March 2020 titled, “WAIVER REQUEST FOR FDA-DESIGNATED SUFFIX FOR BIOLOGICS,” Pfizer responds to an FDA consideration that the shots might need a new adverse event monitoring system by advocating that “Pfizer believes that an additional suffix for COVID-19 mRNA Vaccine (nucleoside modified) would be burdensome and redundant as the US Department of Health and Human Services (HHS) has existing methods to ensure safe dispensing and optimal pharmacovigilance of vaccines.” They referred to the existing methods as “robust” and listed VAERS as one of the tools.

Thus, Pfizer can’t have it both ways. If VAERS was a good enough system to support its licensure agreement, then it must be held accountable for the blaring safety signals emanating from the existing system. We also now know that Pfizer knew of over 1,200 fatalities early on, adverse events in 23% of the trial group, hundreds of categories of severe adverse events, understood the injection does not stay in the injection site, and was aware of the fact that 16% of the lipid nanoparticles are deposited in the liver. Pfizer also lied and stated that the shots provide “Active immunisation to prevent COVID-19 caused by SARS-CoV-2,” as if it were a fully sterilizing vaccine. They also conceded early on in the newly released document (p. 24) that the inflammation increases with the second and third doses.

In other words, all this paints a picture that there is zero safety net for the public, and the sky is the limit in terms of the scope and severity of adverse events we will see in the coming months. The public already knows this, at least subconsciously, because we are now seeing warnings about cardio surveillance programs for athletes, as numerous athletes continue to drop suddenly.

For this academic year, the Orange County, California, public school system put out a new warning for its athletics department to now mandate electrocardiogram (ECG) screenings for all high school students signed up for athletic programs. The reason? “ECG screenings help identify athletes who are at risk for sudden cardiac arrest which is the leading cause of death in athletics.” Why beginning in 2021-2022? What changed? And why won’t they identify those who got the shots as the culprits? Well, some of these same California schools are stilling requiring this shot!

Unfortunately, electrocardiograms are often insufficient to detect myocarditis early on, according to several cardiologists I’ve spoken to who have been treating vaccine-induced cardiac injury. Cardiac MRIs are needed to detect scabbing, but insurance companies don’t want to pay for them. Our government has a responsibility to pay for cardiac MRIs in young males who’ve received the shots, so they can detect latent heart inflammation before it’s too late.

In 1999, when our government still cared about human beings, the RotaShield vaccine for rotavirus was pulled from the market after just 10,000 infants received it because of a suspected potential 1/2,500 risk of intussusception, a rare disorder causing the blockage of the intestines. At the time, the CDC strongly encouraged the use of VAERS to surveil the extent of the problem. Now, with hundreds of potentially dangerous ailments, they won’t stop the vaccine even for those at the lowest risk for COVID and the highest risk for myocarditis – even after the pandemic was declared over and even for a vaccine that no longer works.

Just how prevalent is myocarditis? In one emergency room at the University of Tel Aviv Medical Center, there were eight cases of myocarditis in a small age group after having received the shots, according to a study published in Circular. This was in February and March 2021, before practitioners were even on alert for this safety signal. In another study published in the Journal of the Pediatric Infectious Diseases Society, eight adolescents presented over the course of 36 days to Nicklaus Children’s Hospital in Miami with perimyocarditis. These were just the people who presented within 4 days of receiving a dose of the Pfizer shot, shortly after it was approved for this age group.

Ironically, the longer we go on promoting and mandating the shots, instead of pulling them from the market – despite the dreadful degree of safety problems – the more it acclimates the public to the new normal of “sacrifice” and tolerance for an even greater degree of risk in order to “do the right thing.” Which raises the bar even further so that anything short of proving with the scientific method that 50% of people will die from it will be insufficient for pulling the gene therapy. We are like frogs in boiling water.

Nobody explained it better than Stefan Oelrich, head of Bayer’s pharmaceutical division, at the 2021 World Health Summit (at 1:37:25). Gleefully trumpeting the future of “cell and gene therapy,” Oelrich touted the mRNA shots as the first triumph of this technology. “If we had surveyed two years ago the public if you were willing to take gene or cell therapy and inject it into your body we would have probably had a 95% refusal rate,” said Oelrich with a twinkle in his eye. “I think this pandemic has also opened many people’s eyes to innovation in a way that maybe was not possible before.”

Indeed! The new normal. Just wait until the next mRNA and you will heartily embrace the taste of innovation.

Authored by Daniel Horowitz via TheBlaze.com